how to enter a tournament

From the home screen select Spin Your Lineups. The sports that are available to play will populate and you can choose anyone that you wish. The countdown timer on the right indicates when the next tournament starts.

From the Tournament Type Lobby choose if you would like to play a Chip or Token tournament (you can also view both):

Within the Tournament Selection Screen you may choose the tournament you would like to enter. The sport is displayed on the top left and icon in the top right shows if you are viewing Chip and/or Token tournaments (Red Icon: Chip & Yellow Icon: Token). Filters are available to get to specific tournament types. Each tournament box includes:

Tap the info button in the top right of the tournament box to see specific tournament details. This includes:

On the Spin Screen, get started by tapping the numbered Spin Chip on the bottom of the screen. The athletes will populate for each position and the initial line up is now entered into the tournament. The spin screen includes:

The LINEUP SCREEN provides you a summary of all of the information for the tournament you entered. It includes:

From the home screen you can tap My Tournaments Entered to view your:


Use the filters within MY TOURNAMENTS to select what you would like to view.

You have multiple locks and multiple spins to create your ultimate lineup. The number of events in a tournament will change the number of Spins & Locks available:

The top 10% (or more) of line-ups are paid out a percentage of the prize pool based on final score ranking. The top line-up wins the largest percentage and decreases from there.

The top 50% of line-ups based on final scores split the prize pool evenly.

The top 50% of line-ups based on final scores split the prize pool evenly.

This is a winner take all event. The top line-up earns the entire prize pool. 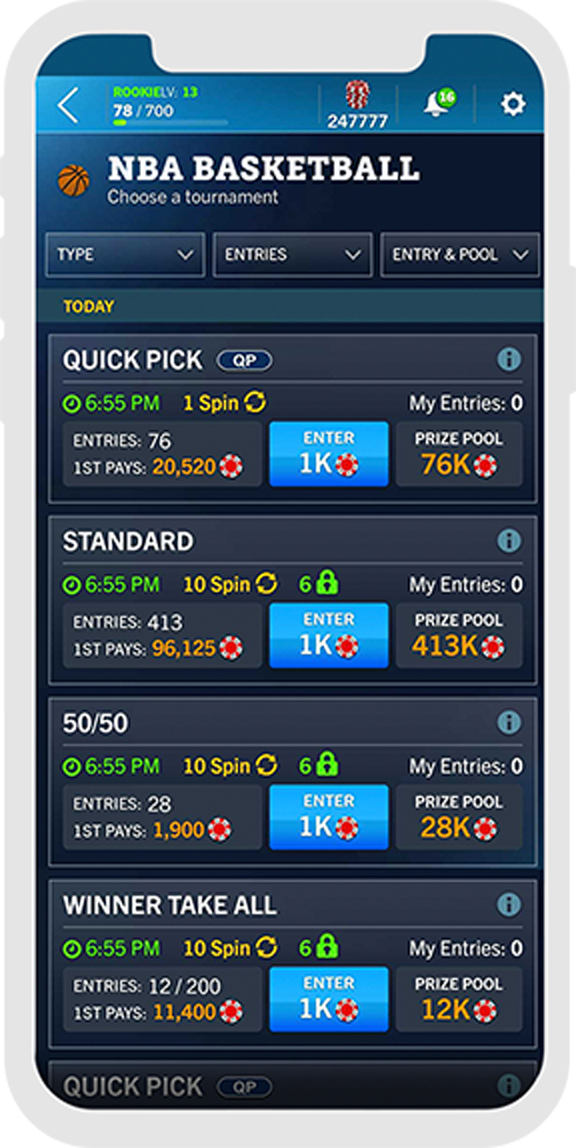 Test your luck with single spin. There are no locks or extra spins.

The top 10% (or more) of line-ups are paid out a percentage of the prize pool based on final score ranking. The top line-up wins the largest percentage and decreases from there.

Test your luck with only 1 spin. The top 50% of line-ups based on final scores split the prize pool evenly.

Test your luck with only 1 spin. This is a winner take all event. The top line-up earns the entire prize pool.

Only the first game of a doubleheader will be used for FantasySpin scoring. Players will only score points for the game which starts at the time listed in the tournament details.

After you spin, the orange number in the top right corner of each athlete's square is their projected points. This score is based on each athlete's projected statistics for the upcoming game. The higher the score the better the athlete. Also, at the top of the spin screen you will see your line-up's total projected score and star rating. This is an easy indication of how awesome your line-up is based on the sum of all your players' projected scores. The more stars, the better the line-up!

Please note that projected scores, projected athlete ranks and projected lineup tournament ranks are only provided to assist you in creating the best lineup possible based off of projected statistics from our partners. It in no way reflects the actual outcome of the game.

There is a ton of information for each athlete on the spin screen and within the lineup view, prior to the tournament start time. You can use this to help you decide if you want to lock in the athlete or lock in your lineup if you are done spinning.

You may also click on an athlete to get more details about them, including:

We receive our stats daily from a third party and player pools are randomly generated by player projections for the upcoming games. Players that appear when spinning are players that still had a projected score for that game. When changes occur, all athletes that are already in users’ lineups will be given the last projected score of those athletes. We don’t want our users to be punished for changes that are beyond their control. We are currently working on a future enhancements that will increase the visibility of game changes (postponed, canceled, etc.) and player injuries to the users.

What happens if an athlete does not play?

Some reasons why an athlete may not play:

We receive our stats daily from a third party and player pools are randomly generated by player projections for the upcoming games. Players that appear when spinning are players that still had a projected score for that game. When changes occur, all athletes that are already in users’ lineups will be given the last projected score of those athletes. We don’t want our users to be punished for changes that are beyond their control. We are currently working on a future enhancements that will increase the visibility of game changes (postponed, canceled, etc.) and player injuries to the users. Please note that on rare occasions we may receive a late update from our stats providers that changes an athlete's projections to 0. On these occasions you will receive the athletes last projected score.

tournaments have a max of 3 entries per tournament per user. Max entry limits may vary depending on tournament.

You really like some of your players, but you don’t want to lose them? Lock them in!

There are two ways to lock in a player:

The cost of the lock may be found at the bottom of the spin screen. Be careful though, you have limited locks. If you lock in players and haven’t spun yet, those players can still be unlocked. Once you spin, there’s no going back! Those player locks are already in place and will not be refunded.

These players are yours and are locked in for this line-up selection. Feel free to spin again to make changes to the rest of your lineup.

The athlete pool consists of all athletes expected to participate in a sporting event or a group of events with a projected score of one (1) or greater.

The athlete pool may change based on updates to scoring projections and/or athlete eligibility (injury, suspension, etc.). If cases where an athlete has been spun, but is no longer available, the lineup will be granted the initial projected score for athlete. For multi-spin tournaments the FantasySpin user will also have the option to edit their lineup if they have available spins remaining.

Athletes being traded may impact tournaments that have already been created with the athletes on their previous teams. Athlete team listings on FantasySpin are updated regularly, once per day (overnight). As tournaments may be created many days in advance, traded athletes may not be available in tournaments which include a game involving their new team, but not their old team. An athlete you spun may no longer be available in a contest which includes their old team, but not their new team. In that case, you may spin a replacement (if you have additional spins) or you will receive that athletes projected score.

Note that on the day an athlete is traded, they may still be listed for their old team within FantasySpin. In rare cases, FantasySpin reserves the right to update the pool of players for a tournament before the lock time at its own discretion.

Once a lineup has been entered into a tournament it can not be removed. You may edit a lineup if you have additional spins in a multi-spin tournament.

Lineup may only be edited if you are playing a multi-spin tournament and have not used all of your available spins. You may see your remaining spins after you have submitted your lineup within the Lineup view or by viewing your lineup in My Tournaments.

If you have remaining spins available, the Edit Lineup button will be available when viewing the lineup. All athletes that you have locked will remain locked (athletes may be unlocked) and you may use the remainder of your spins.

We try to settle tournaments and run winnings as quickly as possible, but must ensure we do so accurately. Most tournaments are settled shortly after the last game finishes. However, to settle we have to wait until all the athlete statistics have been reported by our third party stats provider. This lets us ensure that the final box scores are complete. There can sometimes be last minute changes to statistics. If there is difficulty obtaining official results or issues with scoring, the contest may be settled the following day.

For every game, we receive live scoring from one of our stats providers. After each game has ended, we receive the final box score and settle all the tournaments. On rare occasions, the final box scores are revised after they have been released. When that happens, the athlete scores on FantasySpin will not be updated and the settlements will not be revised. This is not the same situation as a case where a revision needs to be made after settlement due to a problem with the data feed or the settlement process. In these cases the tournament settlement process may be reversed.

While we try to ensure that FantasySpin is functioning smoothly at all times, like any app service we may periodically experience periods of outage or slow performance. These can sometimes result in an inability to access the app, problems editing lineups, or problems entering new tournaments. If you're unable to access the app, please report the problems by emailing us at help@fantasyspin.com or completing the Contact form. If there are sustained periods where users are unable to access the app, or otherwise prevented from editing lineups we will notify the community through a notification and may return all chip entry fees & spin costs.